Cole Custer’s first NASCAR Xfinity Series win of the 2018 season was a timely one. 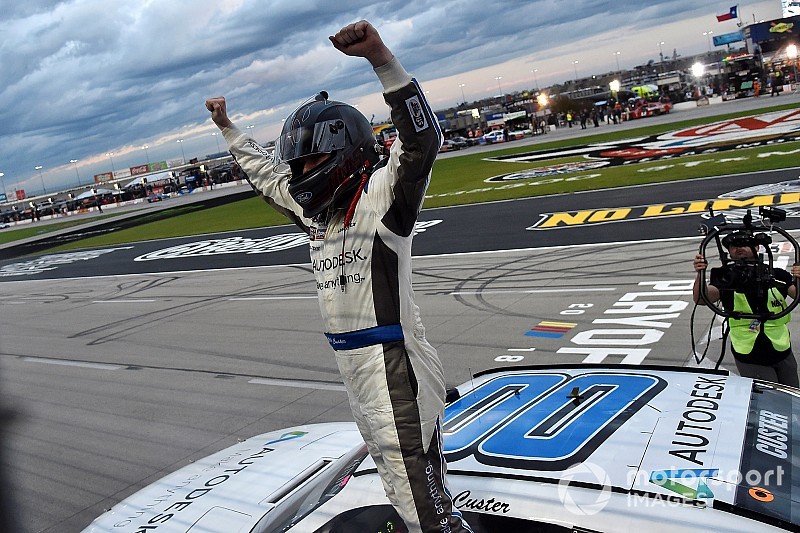 Custer got into side of then-leader Tyler Reddick on the final of 200 laps and just beat him to the checkered flag to win Saturday’s O’Reilly 300 at Texas Motor Speedway.

The win sends Custer to the Championship 4 in two weeks at Homestead, Fla., where he will compete for the series title. Custer won the Homestead race one year ago but was not competing for the championship.

"I can't believe it," Custer said. "I did all I could and drove in deeper than I had all weekend into Turn 1 trying to get on (Reddick's) bumper and it worked out.

"We're going to Homestead and I think we have a great chance to win it. It's just awesome. We haven't won this year but we've been so close. It's been frustrating but we've kept going.

"There is no better time to do it."

Rounding out the Top 10 were Brandon Jones, Matt Tifft, Elliott Sadler, Spencer Gallagher and Daniel Hemric, who rebounded from a late-race incident.

On Lap 134, Austin Cindric got into the left-rear of Christopher Bell and Bell spun and backed into the Turn 2 wall. Bell had gotten loose on the previous restart and drifted back in the field and remained in the outside lane when the incident took place.

The damage to Bell’s No. 20 Toyota was extensive and brought an early end to his race, leaving him in a precarious playoff position.

“I’ve won six races this year. I’ve got a chance to win two more,” Bell said. “I’m going to go out there and try to win races. I’ve never been a points racer and my results show for that.

“I’m either up front or crashing.”

The race returned to green on Lap 138 with Hemric leading the way.

Joe Gibbs Racing teammates Jones and Ryan Preece got into each other on Lap 139 to bring out another caution just as Allgaier passed Hemric for the lead. Allgaier led Hemric on the restart on Lap 145.

After a couple of swaps, Hemric finally cleared Allgaier to return to the lead on Lap 147.

After again fighting side-by-side, Allgaier cleared Hemric to move back to the top spot on Lap 154.

With 30 laps remaining in the race, Allgaier held a small advantage over Hemric as Nemechek moved into third.

With 27 to go, Nemechek powered around Hemric and moved into the runner-up position with Hemric dropping to third.

On Lap 184, Nemechek went to the inside of Allgaier and into the lead for the first time in the race.

Ryan Reed got hit by his Roush Fenway Racing teammate Ty Majeski and wrecked on the backstretch on Lap 187 to bring out a caution.

Custer was among those who stayed out and took over the lead on the restart with seven laps to go. He was followed by Reddick, Cindric and Sadler. Nemechek lined up sixth.

With six laps to go, Shane Lee got into Hemric and sent him spinning off Turn 4 and also collected Garrett Smithley. The race returned to green with two to go and Reddick leading the way.

Custer held off a furious charge from Allgaier to take the Stage 2 victory.

Following the break between Stages 1 and 2, all of the lead-lap cars elected to pit with Hemric the first off pit road and remained in the lead on the restart on Lap 52.

Reddick quickly went to the outside and back into the lead shortly after the restart.

With 25 laps left in the second stage, Reddick held a small advantage over Custer with Allgaier running in third.

On Lap 81, Joey Gase made contact with Reddick who then returned the favor, which sent Gase spinning in front of Reddick and Custer, who was running second. Custer got credit for the lead after the incident.

Most cars elected to pit, with Bell exiting pit road first, but Custer stayed on the track and remained in the lead when the race returned to green on Lap 86.

Reddick went to the outside and back into the top spot shortly after the restart. Custer quickly returned the favor and reclaimed the lead.

After taking the lead following a restart Hemric held off Custer to claim the Stage 1 victory. It’s the ninth stage win for Hemric this season.

Reddick was third, Bell was fourth and Sadler completed the top-five.

On the first lap of the race, Bell, the pole-sitter, spun in front of the field. Nemechek and Gallagher also spun trying to avoid Bell. Austin Cindric also received damage in the incident.

“That’s unbelievable,” Bell said over his radio. “I don’t get it.”

The race returned to green on Lap 5 with Lee in the lead.

On Lap 8, Reddick went to the inside of Lee and took over the race lead for the first time. Custer moved into third.

NASCAR displayed a caution on Lap 15 for debris on the frontstretch. The race returned to green on Lap 19.

On Lap 22, Ryan Sieg and Truex made contact coming through Turn 2 to bring out yet another caution. The race returned to green on Lap 25 with Hemric moving quickly into the lead.

With five laps remaining in the first stage, Hemric held a 1.6-second lead over Custer with Reddick running in third.

Seven cars had to start the race from the rear of the field – Ty Majeski and Ross Chastain for unapproved adjustments and Cindric, Joey Gase, Josh Bilicki, David Starr and Morgan Shepherd.

Custer now in position "to make something happen" at Homestead