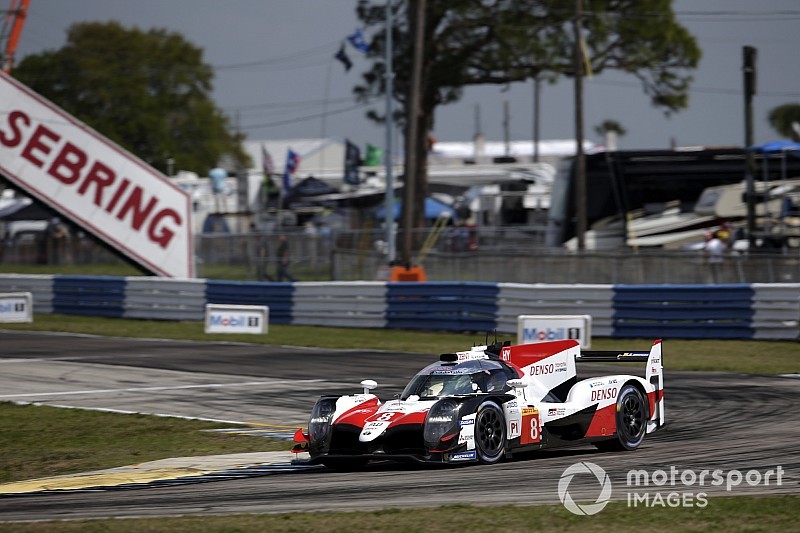 The Japanese driver posted a 1m41.957s with only a couple of minutes left on the clock of the 90-minute session aboard the #8 Toyota TS050 Hybrid to better the 1m42.506s set by Jose Maria Lopez in the sister #7 car early on.

That was slower than the best time set by Mike Conway in pre-event testing last weekend but still comfortably faster than Marcel Fassler's Sebring 12 Hours qualifying record from 2013.

Lopez and Sebastien Buemi did the lion's share of the running in the two Toyotas after missing last weekend's test because they were on Formula E duty in Hong Kong.

The two Rebellion R-13s ended up third and fourth in the times.

Gustavo Menezes initially led the chase of the Toyotas with a 1m43.664s in the team's #3 entry, before Andre Lotterer's replacement in the #1, Mathias Beche, bettered it with a 1m43.552s with 20 minutes remaining.

SMP Racing took fifth and sixth in the times with its pair of BR Engineering BR1s, team newcomer Brendon Hartley leading the way with a 1m43.483s.

The lap put him half a second up on Andre Negrao's 1m48.346s time in the Signatech Alpine Oreca 07 - giving Michelin a one-two after Signatech's winter switch from Dunlop tyres.

Matthieu Vaxiviere was third fastest in the TDS Racing Oreca on Dunlops with a 1m48.786s.

Maxime Martin set the pace for Aston Martin in the GTE Pro class.

The Belgian posted a 1m58.044s in his Aston Martin Vantage GTE to go faster than Harry Tincknell's 1m58.356s set aboard the best of the Ganassi Ford GTs early in the session.

The two factory Porsche 911 RSRs ended up third and fourth fastest in the hands of Richard Lietz and Kevin Estre respectively.

Lietz's 1m58.577s was less than two hundredths quicker than Estre managed in the sister car.

Marco Sorensen took fifth in the second Aston ahead of Ford's Stefan Mucke and the two MTEK-run BMW M8 GTEs.

Pedro Lamy was fastest in GTE Am for Aston Martin with a time just nine thousandths quicker than Dempsey-Proton Porsche driver Matteo Cairoli.

The Project 1 GTE Am team took delivery this morning of a new Porsche 911 RSR to replace the car seriously damaged by fire in the test, but did not take to the track in FP1.

A red flag was thrown with a little over half an hour remaining, ostensibly for a crash involving Dempsey-Proton driver Gianluca Roda.

However, it turned out Roda had not crashed but had requested medical assistance from the car after an off-track moment, leading race control to stop the session unnecessarily.