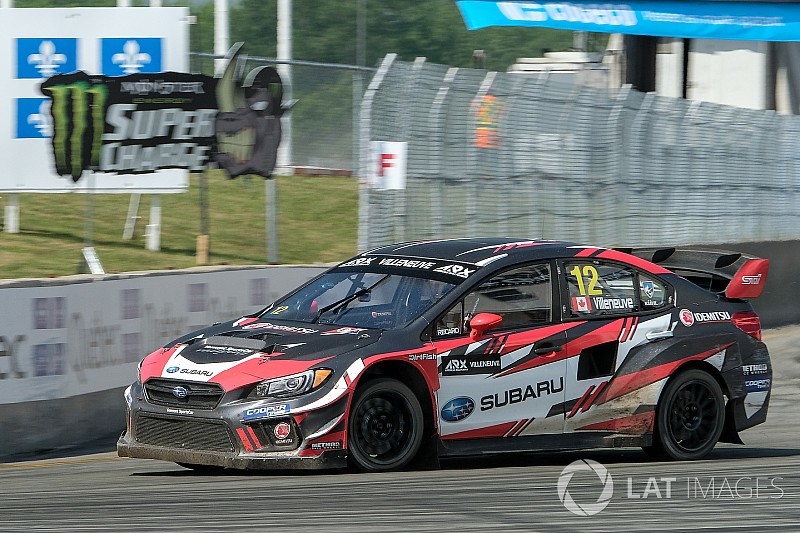 After a four-year absence, Jacques Villeneuve was back behind the wheel of a rallycross car as he took part in the ARX (Americas Rallycross Championship) event at the Grand Prix de Trois-Rivières last weekend.

The former Formula 1 champion was behind the wheel of the Subaru Impreza WRX STI normally devoted to Travis Pastrana at Subaru Rally Team USA. His teammates were Swedish driver Patrik Sandell and Australian Chris Atkinson.

In the first free practice, Villeneuve set the ninth fastest time, and he was up in seventh spot in the second session held on Saturday.

He was again seventh in the first qualifying round (of just four laps) but he was forced to retire in the second one, losing precious points (each round gave drivers a certain number of points to establish the starting order of the two semi-finals).

The team was nevertheless delighted to work with the former F1 driver. “We’re very happy to have Jacques [Villeneuve] on board,” Lance Smith, president of Vermont SportsCar – the company that runs the Subaru USA program - told Motorsport.com. “He wants to learn, he wants to improve, and he’s getting better each time he climbs into the car. He’s also a genuine team player.”

In the third qualifying round, Tanner Foust in his VW Beetle made a spectacular get away to lead the pack as Villeneuve ran in second place.

On Lap 3, Villeneuve took the joker lap and rejoined in fourth place behind Patrik Sandell and René Münnich.

Tanner and his Beetle were in the different league, and easily won the race. Villeneuve arrived home in fourth place, and last at the conclusion of the short four-lap dash. After three qualifying rounds, Villeneuve was in 9th place in the standings with 107 points.

Meanwhile, Fort Frances, Ontario Steve Arpin, who raced in ARCA as well as NASCAR Xfinity and Truck series in the past, claimed fifth place in Q3 aboard the No. 100 Ford Focus RS RX and lied fourth in the standings with 119 points.

The fourth and final qualifying session saw Villeneuve finished second behind Atkinson and ahead of Münnich. The lap time difference between Atkinson and Villeneuve was roughly seven tenths of a second in favour of the Australian. Minutes later, Arpin took fourth place in another qualifying round.

On Lap 3 of the second semi-final, Villeneuve took the standing start alongside his teammate at Subaru, Patrik Sandell. The team issued team orders, and the Canadian had to let Sandell pass him to make the grand finale (which made perfect sense as Villeneuve is contesting only one race while Sandell is doing the entire championship). Villeneuve braked early for Corner 1 to let the other Subaru pass him. Then, he made a driving mistake and touched a wall with the rear end of the car. Later, he clipped the tire wall, resulting in a flat tire.

That was it for Villeneuve. Arpin drove a good race and finished third behind Ken Block and Patrik Sandell. In the final race, Arpin claimed the sixth and last place.

Round 3 was highly spectacular with L’Estage and Ranger battling hard for victory during the last lap of the race. L’Estage then managed to drive his BRP Can-Am Maverick X3 to victory after a fierce, wheel-to-wheel battle against Ranger.

“It was really close between I and Andrew [Ranger]. The one of us who’d get out of Corner 1 in first place would be very hard to beat,” L’Estage told Motorsport.com.

“The track is tight, and it’s really difficult to pass a rival. We also get a lot of dust and stones inside the cockpit. We’re covered with sand and it’s difficult to see properly in front of us. Thanks to Can-Am for offering me this ride. These are fun to drive. They're light machines at about 1,300 pounds and 180 horsepower. They accelerate fast and they brake very well. I really enjoy them.”

Finally, in the CXW Rallycross series for rally cars, Simon Losier captured victory in his Mitsubishi ahead of Karel Carré in his Subaru and Marc-André Brisebois in another Mitsubishi.