LABONTE AND TEAM FIRED UP ABOUT RICHMOND INTERNATIONAL RACEWAY 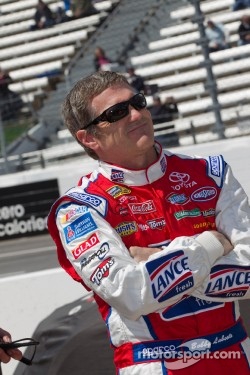 RICHMOND, Va. (April 26, 2011) - - Tis the season to grill according to Bobby Labonte as his No. 47 Toyota Camry lights up the Kingsford Charcoal brand during the night race at Richmond International Raceway where his best NASCAR Sprint Cup Series finish is second-place (twice).

“We’re looking forward to having Kingsford on our Toyota Camry at Richmond,” Labonte said. “It’s really a brand my family and I use constantly. We just grilled out steaks and chicken Easter weekend. My favorite thing to grill is chicken. Now, that it’s finally warm it is time to pull out the grill both at home and at the racetrack this weekend in Richmond.”

There have been seven different race winners in the first eight races and Labonte is primed to be next at the aggressive short track during the Crown Royal Presents The Matthew and Daniel Hansen 400. The Trinity, N.C. resident has four top-five and 10 top-10 finishes at RIR and it’s a favorite venue of his.

“It’s a fun track for me and a fan favorite too,” said the 2000 NASCAR Sprint Cup Series champion. “We should have a couple more tracks on the schedule like Richmond because it’s neat for fans to be able to see their drivers up close on the track. On top of that, it’s always a great night race. I love Richmond and I’ve ran good there. You can race two and three wide and can pass. All around, it’s a good competitive track to race at.”

Last season at the .75-mile oval, Frank Kerr led his JTG Daugherty Racing team to a fifth-place finish with Australian driver Marcos Ambrose in September. Fast forward to this season, Labonte’s best short track finish with the racing organization is a 13th-place finish at Bristol Motor Speedway. Because of the team’s short track success, Kerr is optimistic about their chances this weekend with Labonte that has 21 NASCAR Sprint Cup Series wins to his credit.

“I’m ready to get there with Bobby,” Kerr said. “Our JTG Daugherty Racing team has always run well at Richmond. We finish ninth in the spring and fifth in the fall last season with Marcos and we feel really good about our package this weekend.”

Like his driver, Kerr is a fan of Richmond International Raceway for more reasons than one.

“The track is real racy and there are a lot of different grooves, which gives you options,” said Kerr, who has elected to take the car Labonte raced at Phoenix International Raceway (21st).

It also has a personal significance to Kerr.

“I won my first NASCAR Nationwide Series race there as a crew chief with Robby Gordon,” Kerr said. “And, I raced a Silver Crown car there in 1995. So, it’s a very special track for me and I’m looking forward to going back this time with Bobby.”