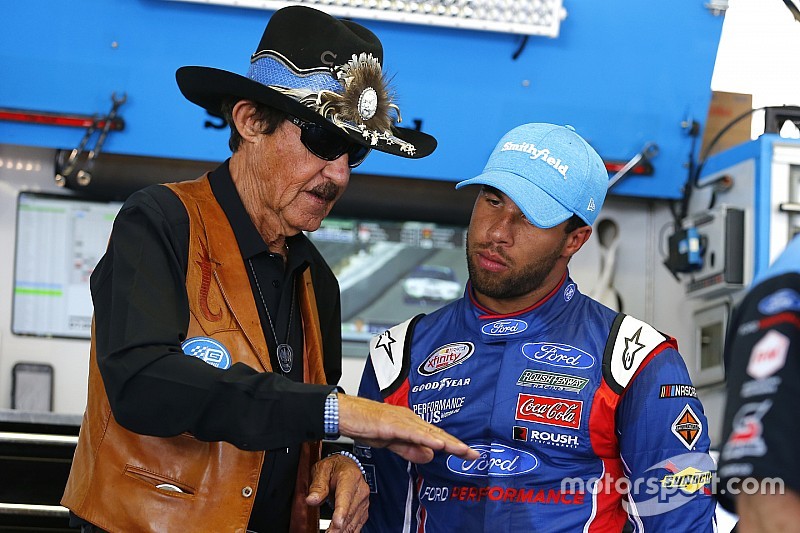 Stewart-Haas Racing’s Aric Almirola says that Bubba Wallace Jr can’t afford to “screw up” at Richard Petty Motorsports because there will be inevitable comparisons to NASCAR Cup legend Richard Petty.

Almirola drove for seven-time champion Petty’s team from 2012 to 2017, winning once at Daytona in 2014 before he suffered a back injury that sidelined him for two months last season.

Wallace then stepped into the fold in his absence for his Cup debut and competed in four races for RPM, scoring a best result of 11th at Kentucky before joining full-time while Almirola replaced Danica Patrick at SHR for 2018.

When Almirola was asked what advice he could give to the NASCAR Drive for Diversity program graduate, he said: “Don’t screw up.

"The King [Petty] will put his finger in your chest. He has very high expectations and wants the best.

“While he has been incredible for me and my family, it is sometimes hard to measure up because everywhere you go, Richard Petty has done something extraordinary at that race track or venue.

“You look at a guy that has won 15 times at Martinsville. So every time you show up at Martinsville you have to hear about that and see how you stack up. All of those things.

“You are constantly being compared to The King and that is tough to live up to.”

But Wallace says he found Almirola’s advice “funny”, and that it was rewarding to drive for Petty’s team.

“It’s funny that Aric wants to give advice. I still have the text he sent me before my debut, which wasn’t advice.

“But no, I haven’t seen that side yet of the King. Working with the King is special like I’ve said over on TV, I’ve worked with a lot of cool bosses and owners, and there’s no one like Richard Petty.

“I mean, he has just this aura around him. When he walks in the room, it’s like, that’s Richard Petty right there, and you still get starstruck.

“He wants to see the No. 43 back to its winning ways. He wants it to be a more competitive car, and at the same time, we all know realistically that it’s going to take a little bit.

“It’s not going to happen overnight with the things we’ve got going on, like I said, switching over everything [moving from Ford to Chevrolet], we’ve got some pieces of the puzzle, [like] how are we going to be.”

Wallace did concede that there was a fine line between being himself and respecting Petty’s aura.

“For me to share a little bit of his history and his past and all of his accomplishments, you know, in my rookie season, it’s like, this is like, who would have ever thought this story would happen.

“I’m just looking at it as don’t mess up, don’t be a hero like he told me before climbing into the car at Pocono. There’s no need to be a hero, just go out there and do what I can do.”

DJ Kennington ready for second start in the Daytona 500